Abstract: The 2018 Memorandum of Understanding between the Philippines and China on cooperation on the Belt and Road Initiative ascertained a stronger infrastructure collaboration and interconnectivity in the transportation, telecommunication, and energy sectors. As I explained in an earlier publication, President Rodrigo Duterte welcomed Chinese aid with the hopes of ushering in a “golden age of infrastructure” in the Philippines. Recognizing the economic and geopolitical implications of infrastructure development as spurred by China’s Belt and Road Initiative (BRI), this essay appends the discussion on Manila’s closer cooperation with Beijing by analyzing how the Beijing-Manila relationship impacts the state of democracy and the rule of law in the Philippines.

How does the Beijing-Manila relationship impact the state of democracy and the rule of law in the Philippines? In posing this question, it is not my intention to create false causation. It must be noted that even before Manila’s inclusion in Beijing’s political and economic orbit, the country was already experiencing democratic erosion. Duterte’s assumption of the presidential seat punctuated this situation.

Human Rights Watch reported that since taking office on June 30, 2016, Philippine President Rodrigo Duterte has carried out a drug war that has led to thousands of deaths, mostly urban poor. Those who are accused are labeled threats to “peace and order” are “othered” by Duterte and his supporters, branding them as enemies of the state. The antagonism directed towards the “othered” population is manifested in Duterte’s and his supporters’ call for their total extermination. In Duterte’s first month as president, he announced on Philippine national TV: “If [a criminal] fights, and he fights to the death, you can kill him… please feel free to call us, the police, or do it yourself if you have the gun… you have my support.” Duterte repeatedly suggested in several interviews that they (addicts and dealers) do not have any right to live. In an interview with the media, Duterte asked, “why should these people live?” Supporters of Duterte also argue the same, with pronouncements that drugs are the root of robbery, rape, and murder, and it is for that reason that it is right that they all die.

Duterte’s drug war has also instigated fear in his political enemies, as anyone could easily be branded as a drug dealer or user. Democracy in the Philippines has further become an illusion, as political enemies were either silenced or jailed, as was the case of the famous Philippine senators, Leila De Lima and Antonio Trillanes III. These senators were known as loud critics of Duterte and were later imprisoned for being allegedly linked to the country’s large-scale drug trade. Political opposition has also been diminished drastically, as most politicians who were former members of opposing parties have declared allegiance to Duterte by officially jumping on the bandwagon, joining Duterte and his daughter’s political party, the “Hugpong ng Pagbabago” (which is roughly translated as the “Faction for Change”).

Meanwhile, fear is further amplified by implementing regulatory policies and strategies that may target political dissenters within the population. For instance, there were reports that authorities planted incriminating evidence such as drugs to justify their unlawful actions during police raids.

That said, how can Beijing and its flourishing relations with Manila contribute to the worsening state of democracy in the Philippines?

Despite the above-mentioned issues being domestic, I argue that China has been instrumental in promoting and sustaining Duterte’s autocratic rule. This phenomenon is unsurprising, considering global superpowers’ (the United States in particular) long history of sponsoring autocracies in Asia and the Pacific. For instance, during the Cold War, new democracies in the region were formed under repressive and oppressive dictatorships. While governments of nations such as Taiwan, Indonesia, and the Philippines were supposedly founded on the ideals of liberty and democracy, dictators such as Chiang Kai Shek, Suharto, and Ferdinand Marcos rose to power. Despite some Asian leaders being “non-democratic, repressive and massively corrupt” (Ricklefs, 2012, p. 337), their reign was supported by the United States so long as they “preserve” democracy and “protect” their nations from “imminent” communist threats. Simply put, as Ricklefs (2012) noted, “anti-Communism trumped support of democracy in American policy” (p. 337).

The difference, however, is that in recent years, China has emerged as a new regional hegemon as she exhibits the capacity to set and dictate regional order (Dosch, 2007, p. 231).

While it is challenging to find sources that speak to direct Chinese interventions in the practice of democracy in the Philippines, China, in recent years, “has become a major source of ideational and material support” for autocracies and illiberal leaders in South and Southeast Asia (Croissant, 2020). In the Philippines, Duterte’s supporters express admiration for the authoritarian governance model.

Observing the decline of democracy in the Indo-Pacific region, Croissant (2020) noted that “although not a direct ‘cause’ of democratic decline, the apparently growing influence of China and its governing model throughout the Indo-Pacific…is increasingly affecting the domestic politics of both democratic and authoritarian countries in the region.” Further, as China presents itself as an “alternative source of economic, military and diplomatic support for governments,” impunity and violence became more rampant in the Philippines as Duterte no longer owes his political survival to the West (Croissant, 2020). Quoting Custodio (in Cabato, 2019), “under pressure from the West over his human rights record,” China has become Duterte’s “bread and butter.”

In 2018, Duterte and Xi Jinping signed a Memorandum of Understanding, which included, among other things, plans for joint oil and gas exploration in Philippine waters, commitment to China’s Belt and Road Initiative, and infrastructure cooperation between the two nations through concessional loans to support Duterte’s key infrastructure projects. By aligning Manila with Beijing, Duterte received Chinese development support, which he hoped would help usher a “golden age of infrastructure” in the Philippines—a dream that will find realization through his regime’s “Build, Build, Build” (BBB) project. [1] More importantly, by aligning with Beijing, Duterte no longer had to worry about the economic cost of his human rights record.

The worsening state of democracy in the Philippines

By presenting itself as a viable source of trade and development support, China enables the autocratic practices of Duterte’s government and contributes to the worsening state of democracy in the Philippines.

I have earlier exposed in a working paper several human rights violations in Duterte’s Chinese-funded infrastructure flagship projects. For the sake of “development,” these projects encroached on ancestral lands and ultimately threatened indigenous peoples’ existence. Quoting the Philippine president as he promoted the China-funded Centennial Water Source-Kaliwa Dam: “Let me be very clear to the citizens. You have every right to protest if it places your lives in jeopardy, but if the safeguards are there between your concerns and the (water) crisis that you’re trying to avoid, I will use the extraordinary powers of the presidency” (Ranada, 2019).

Meanwhile, leading players in the Philippine media industry are currently suffering from political attacks and systematic intimidations. ABS-CBN, the largest media conglomerate in the country, has been told to shut down its TV and radio broadcasts. Journalist Maria Ressa, the 2018 Time person of the year and CEO of the online news platform, Rappler, has been unjustly charged with “cyber-libel” by the political allies of Duterte (Wanless, 2020). The Philippine Daily Inquirer, the country’s largest newspaper, also experienced similar harassment in the past. Duterte and his supporters have been very keen and consistent in criticizing these companies, accusing them of “unfair coverage, liberal bias, tax evasion, and even ‘swindling’” (Heydarian, 2020). On several occasions, they have also been ironically branded by Duterte’s supporters as propagandists, peddlers of fake news, and “dilawan” or “yellows” (a polarizing term they use to associate dissenters with the political party of the former liberal President Benigno Aquino III). As Heydarian (2020) observed, “all three media networks have prominently featured news and commentary critical of Duterte’s war on drugs, his China-leaning foreign policy, and authoritarian brand of populism.”

The COVID-19 pandemic has even amplified the democratic backsliding in the country. At the onset of the pandemic, the Philippine Congress granted Duterte nearly limitless emergency powers (Brown, Brechenmacher, & Carothers, 2020).

In April, Duterte authorized the killing of quarantine violators amid coronavirus chaos (Billing, 2020). After putting the country in “highly militarized” lockdown (Aspinwall, 2020), he said in an impromptu national address: “My orders to the police and military … if there is trouble or the situation arises where your life is on the line, shoot them dead.” This speech was delivered following “weeks of criticism of the government’s handling of the coronavirus pandemic” (Billing, 2020). People earlier had criticized Duterte’s hesitance to ban flights from China when the outbreak started. Of course, Duterte, at that time, was more fearful of the political implications of banning flights from China than the virus itself. The extreme lockdown in the country has prevented people from leaving their homes and kept Duterte critics at bay. Activists, who refused to be silenced by the government, were detained and harassed by authorities. 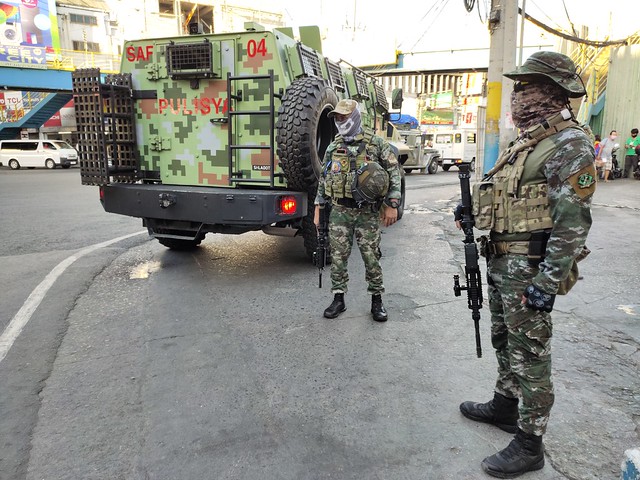 At the same time, it has become a common practice among Duterte supporters on social media to red-tag those who actively express dissent and discontent online. Red-tagging, according to Philippine Supreme Court Associate Justice Marvic Leonen, is “the act of labeling, branding, naming and accusing individuals and/ or organizations of being left-leaning, subversives, communists or terrorists (and is used as) a strategy… by State agents, particularly law enforcement agencies and the military, against those perceived to be ‘threats’ or ‘enemies of the State’” (Tadem, 2020). According to the United Nations, red-tagging “may have a chilling effect on the legitimate work of human rights defenders in the country” (Patag, 2020).

In May, the Philippine National Bureau of Investigation (NBI) subjected an anti-Duterte school teacher who tweeted, “I will give 50 million reward kung sino makakapatay kay Duterte #NoToABSCBNShutDown” (I will give 50 million pesos reward to the person who could kill Duterte #NoToABSCBNShutDown) to a warrantless arrest. Accusing the teacher of posing a “threat to security” and inciting “assaults against the person of the President,” the police charged him with violation of the Cybercrime Prevention Act of 2012 and the Code of Conduct and Ethical Standards for Public Officials (CNN Philippines, 2020). As it set an example for Filipino social media users, the law has become a tool for policing online posts and silencing dissenting voices.

Democratic backsliding is not only a product of a government’s autocratization of domestic politics. Observing the case of the Philippines, apart from Duterte’s weaponization of law and promotion of political repression, external forces, such as global superpowers, also contribute to the worsening state of democracy in the country. Quoting Croissant (2020), China “mitigates the potential impact of punitive action by democratic governments in the West.” China’s readiness to provide alternative sources of economic, military, and diplomatic support decreases the cost of authoritarian abuse in the Philippines.

1. BBB is a domestic policy aimed at making the country more economically competitive by building ports, airports, roads, or railways to uplift “the lives of millions of Filipinos” (Department of Finance, January 23, 2018). It is projected as the means by which “to modernize the country’s infrastructure backbone by rolling out 75 flagship projects” (Department of Finance, January 23, 2018).

Croissant, A. (2020). Democracies with Preexisting Conditions and the Coronavirus in the Indo-Pacific. ​The Asan Forum, 8​(4). Retrieved from http://www.theasanforum.org/democracies-with-preexisting-conditions-and-the-coronavirus-in-the-indo-pacific