Struggle for life and liberty: Rohingyas in India

Abstract: Rohingyas are one of the most persecuted ethnic minorities in the world, stated by the United Nations. They are a group of Burmese Muslim people from Rakhine state in Myanmar situated on Myanmar’s western coast adjacent to the Bay of Bengal in the Indian ocean. In Myanmar, they are seen as “illegal immigrants” by the Buddhist and other communities. Rohingyas have continuously faced persecution, discrimination, mistreatment, massacre, and statelessness over the past several years. Facing ethnic cleansing in Myanmar, Rohingyas have fled to various countries in the world. This article analyzes Rohingyas’ struggle for life and liberty in India from both humanitarian and legal perspectives. Finally, it examines the causes of resentment against the refugees in India.

Minorities are often subjected to discrimination by the state or government and forced to live bare lives in society (Agamben, 2005). Since Myanmar independence (1948), different minority groups have experienced discrimination, ethnic conflicts and violence. Rohingyas are one of them. They reside in the north-western Rakhine (Arakan) state of Myanmar, one of the stateless ethnic communities that face the worst challenges in Myanmar (Mithun, 2018). In Myanmar, they are seen as “illegal immigrants” by the Buddhists and other communities. After the concept of “citizenship” was redefined in Burmese Citizenship Law 1982, Rohingyas became noncitizens overnight, having their NRC (National Registration Card) replaced by the FRC (Foreign Registration Card) (Ibrahim 2016, 66). Their situation has been exacerbated by riots, conflicts, and discrimination, including the 2001 anti-muslim riots and 2016 Rohingyas persecution. Persecution against Rohingyas was termed by the United States Secretary of State Rex Tillerson (Tillerson, 2017) and French President Emmanuel Jean-Michel Frederic Macron (SBS News, 2017) as “ethnic cleansing” or “genocide.”

After each massacre, Rohingyas fled to neighboring countries such as Bangladesh or India. According to the UN Refugee Agency (UNHCR), 655,000 Rohingyas have fled to Bangladesh since 25 August 2015 (UNICEF, 2017). Some of them have migrated to India via Bangladesh.

Struggle for Life and Liberty: Rohingyas in India

The influx of Rohingyas has started to immigrate to India mostly after the 2012 Rakhine state riots in Myanmar. They dispersed in several states like Jammu Kashmir, Delhi, Uttar Pradesh. On August 9, 2017,  Minister of State of the Ministry of Minority Affairs in India, Kiren Rijiju, addressed in the Parliament that 40,000 Rohingyas are living illegally in the country and insisted on the deportation of the illegal immigrants from India (South China Morning Post, 2018). The state has denied giving refugee status to Rohingyas and continuously portrayed them as “illegal immigrants” (Rajagopal, 2017).

The basic fundamental rights accorded to each and every individual, with no difference, are human rights. It is generally accepted as a well-known, universally understood behaviour. The State’s infringement of these basic fundamental rights such as human rights violations leads to a situation that could have produced refugees. However, refugees are simply victims of the human rights violation. Chapter nine ‘the decline of the nation-state and the end of the rights of man’ of Hannah Arendt’s book ‘the origins of totalitarianism’ confer driving base to understand the conception of refugee, how a person’s situation changed from privileged to an unprivileged category and become ‘the scum of the earth’ (Arendt 1948, 276). She delineated the degree of refugees as once they lost their homeland and became homeless; once they had fled from their State, they remained stateless. Once they have been stripped from their human rights, they become rightless and become vulnerable or alienable people in the world. The unfortunate irresoluteness is that the distress to become the rightless being bereaved of the privileges such as life, liberty, and equality before the law and deprived of the freedom of opinion and of the community (Arendt, 1948).

According to the 1951 Refugee Convention by the UN, refugees should have fundamental rights such as non-discrimination (Article 3), freedom of religion (Article 4), right to work (Article 17), and right to education (Article 22). Rohingyas got attention in India when the Indian government announced to deport seven Rohingyas back to Myanmar and announced plans to deport all the illegal foreign nationals, including the Rohingya people who are registered with the UN Refugee Agency (UNHCR). Currently, 16,500 Rohingyas have the refugee identity card given by UNHCR; however, they are considered “illegal immigrants” by the government officials of India (Human Rights Watch, 2017). Historically, India is regarded as the safest place for aliens, mainly from neighboring countries like Bangladesh because of its polite and welcoming nature (Vardhini, 2017). According to Meenakshi Ganguly, director of Human Rights Watch in South Asia, “the Indian government has disregarded its long tradition of protecting those seeking refuge within its borders” (Human Rights Watch, 2018)

India is not a signatory of the 1951 Refugee Convention and the 1967 Protocol relating to refugees’ status, nor does it have a legal framework to deal with refugees’ problems. Still, India’s constitution gives the people the right to live in India with the freedom of life and liberty (Article 21). After the mentioned deportation of seven people in fear of being exiled to Myanmar by the Indian government, 1300 people from 300 families fled to Bangladesh (AlJazeera, 2019). The ill-treatment, including deportation of refugees by any country, tarnishes that country’s image in the international community, which affects the country’s relationships with others. The event was also seen as a flagrant denial of their right to protection, violation of the principle of non-refoulement, and several international human rights obligations (Samtani, 2018). 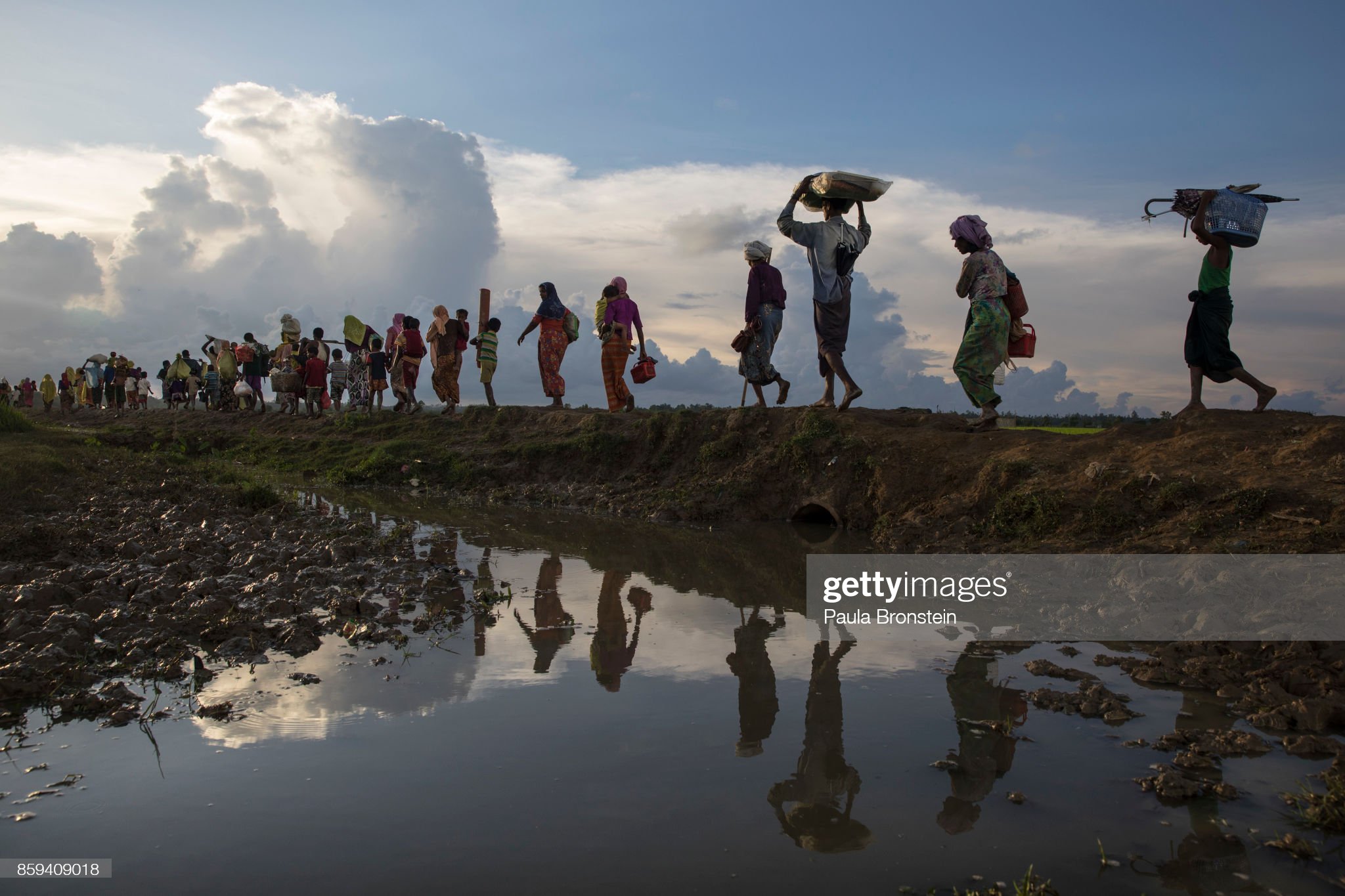 In India, the Rohingya are viewed from two opposite perspectives: the first as “victims” and the second as “illegal immigrants.” In 2014, the independent newspapers (e.g., Anandabazar Patrika, the Hindu) often reported the increasing number of Rohingyas trying to cross the international border of India-Bangladesh arrested by the police to protect the internal security (Chakraborty, 2015). The Anandabazar Patrika associated Rohingyas with the Bodh Gaya blasts and Khagragarh blast in Bardhaman in 2014. The solidarity expressions of separatist groups (e.g., Al- Qaeda’s offshoot, Aqa Mul Mujahideen or Arakan Rohingya Salvation Army (ARSA), Jaish-e-Mohammed (JeM), and Lashkar-e-Taiba (LeT)) in favor of Rohingyas create uncertainty of identities in the region (Dutta, 2017). These are some of the fundamental reasons why the Indian government views Rohingya refugees as “illegal immigrants” and “threat to national security.”

Having been active in India since 1982 with the motive of “leave no one behind,” UNHCR promotes the protection and inclusion of refugees into existing national services such as health and education. However,  in India, Rohingyas have no identity documents and certificates that could help them get national services. Moreover, they are living in poverty, health inconvenience, and lack of employment. As mentioned above, India does not have any legal framework and national refugee status determination system. As a result, UNHCR has been making efforts to claim refugee status for the hitherto “illegal immigrants” in India. By the end of December 2019, 27,700  refugees had registered with UNHCR India (UNHCR, 2020).

The following segment addresses the reasons why refugees are subject to bitter indignation for having been mistreated.

Indian history is full of migration events and examples of hospitality for migrants. In the time of partition of India (1947), India opened the door for millions of migrants or refugees for a specific time-period and welcomed them to the country. However, resentment has thrived for years against illegal immigrants and refugees in India. Residents were accusing outsiders of stealing their jobs, grabbing the lands, involving in the small crimes in the state, that’s the root where the resentment started being born in the society and conflict reported between the groups. Initially, irritation was seen in northeastern India, especially in Assam. In Assam, the perceptible changes in the State’s demographic pattern led by the remarkable influx of people from Bangladesh threaten to reduce the Assamese people to a minority in their own state. This is the reason behind the resentment of the Assam Students Movement called “All Assam Students Union (AASU)” against the illegal immigrants (Saikia, 2017).

From the perspective of refugees’ racialization, increasing terrorist attacks in the region creates many kinds of doubts and questions regarding the security threat and any country’s national security. Several catalysts involved directly or indirectly that lead to the radicalization of refugees such as stigmatization, segregation, alienation, and marginalization by the host countries could be one of the causes for radicalization among the refugees. For instance, Rohingyas’ stigmatization in India as an “illegal immigrant” and “terrorists” (or associated with terrorist groups) may encourage them to engage in radical activities to express their resentment against the state. There are several pressure points that often work as catalysts of resentment such as State policies of the exclusion of the refugees in the society, exaggeration or less attention of refugees’ issues through the media, the difference between refugees’ status in the State, the worst treatment of refugees, and less assistance for refugees. The feeling of “we” and “them” is the preparatory boundary to distinguish between peoples, often causing the distance between two communities and segregating them from each other.

Finally, an increasing number of refugee populations over the region’s population often causes conflict with the others in society. For example, some people criticized the issue of “illegal immigration” that the state government of Assam and India’s central government should take measures to stop the continuous flow of immigration to Assam (Kachari, Hasib HSS, &Nagaon, 2015). Otherwise, it will jeopardize the State’s demographic situation and cause more clashes with Assam’s ethnic communities. The large-scale immigration had brought a change in the political, economic and social structure in Assam. The social and economic impact of a large number of refugees within a territory of the host developing country may cause resentment without much financial support from international organizations and the State government.

There is a fine line between legal and illegal and just and unjust regarding India’s refugees’ rights. The tags of “illegal immigrants” or “connection with terrorist groups” have become the stigma of their lives in India. Refugee crisis and security are two significant issues in the contemporary world. In India’s case, it is a big problem to differentiate these two issues in a single frame so the people who genuinely need help may get assistance. Rohingyas’ uncertain condition in the humanitarian ground and the security perspective needs to be reviewed by India’s states and central government. In the absence of a common legal framework, different groups of refugees in India are being (mis)treated differently. For Instance, Sri Lankan refugees have less assistance or opportunities than Tibetan refugees. The absence of uniform treatment creates a gap between the refugee groups in India with Rohingyas being the most vulnerable.

Agamben, G. (2005). State of Exception. The University of Chicago Press.

Vardhini, H. (2017). Protection of Refugees in India: A Critical Analysis. International Journal Of Advance Research And Innovative Ideas In Education, 3(4). Retrieved from www.ijariie.com123