The Bare Life of the Rohingya: The Effect of a Contested Identity on Radicalisation (羅興亞人的裸命： 有爭議身份對激進化的影響)

Abstract: The Rohingya are a Muslim minority who have been living in Myanmar for centuries. The Myanmar Citizenship Law of 1982 refuses to recognize the Rohingya as an indigenous ethnic group of Myanmar thus denying them citizenship. Therefore, Rohingya have no political or social rights, their identity is being contested and they are the victim of violence, discrimination, persecution, and possibly even genocide. In recent years the conflict in Myanmar has escalated, forcing hundreds of thousands of Rohingya to flee to neighboring Bangladesh. Research has shown that the contestation of identity can lead to radicalization. We have seen this in Palestine with the emergence of the Izz ad-Din al-Qassam Brigades and more recently with thousands of European Muslims joining Daesh to fight in the Middle East. The conflict in Myanmar is still going on but there have already been signs of emerging radicalization among a minority of the Rohingya. There have been several attacks of radical armed Rohingya militia targeting the Myanmar army. This radicalisation is until now happening on a very small scale and with little impact. However, the future will decide how this radicalisation will evolve and to what extent. Although it does not need much explanation that the radicalisation of Rohingya would have a far-reaching impact not only on the conflict within the borders of Myanmar, but it has the power to destabilize the entire region. Therefore, research on the contested identity of the Rohingya can help us to understand the imminent danger radicalisation might play in the conflict between Myanmar and the Rohingya.

Recently the conflict between Rohingya and Buddhists in Myanmar has intensified again after some Rohingya militants attacked an outpost of the Myanmar army. Several soldiers were killed which led to brutal repression from the Myanmar army. Several Rohingya villages were burned down, hundreds were killed, many women were raped and thousands were forced to flee to neighboring Bangladesh (Ramzy). What was different from previous attacks by Rohingya was that this one was coordinated and planned by a radical organization, namely the Arakan Rohingya Salvation Army. This group is organized and financed by Rohingya living in Saudi Arabia and Pakistan who have ties with other radical Islamic organizations like Al Qaida (Barry; Wolf). The fear arises that a growing number of Rohingya refugees fleeing the violence in Myanmar are susceptible to radicalization, even more so since international terrorist organizations like Islamic State and Al Qaida have expressed their interest in the ongoing conflict in Rakhine state (Beech; Wolf). 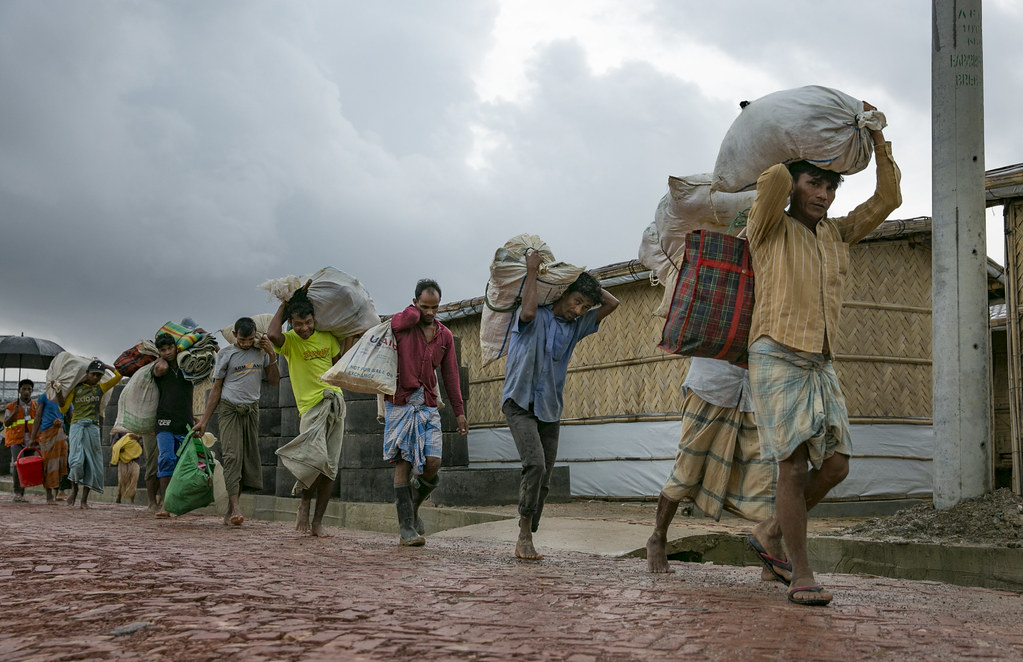 History of the Rohingya conflict

The Rohingya are an ethnic minority living in Myanmar. The population in Myanmar consisted of around one million people before the new rise of violence in 2016. Nowadays less than 400,000 of them remain within the borders of Myanmar. Around 90 percent of them live in the Western state of Rakhine and are Muslim. The government of Myanmar does not recognize them as citizens of the state (Zarni and Cowley). Although there is proof that Rohingya have been living within the borders of contemporary Myanmar prior to 1824, the first British colonisation of Myanmar, the government refuses to recognize them as an indigenous minority even though according to their own constitution every minority that can proof they were living within the borders of Myanmar before the British colonisation can claim status as indigenous (Holliday).

Holliday remarks that after the independence of Myanmar in 1948 the government did recognize the Rohingya as citizens of the state. Some of them even became elected to parliament. The situation changed however after the Citizenship Act of 1982 which denied the Rohingya citizenship. This citizenship law was established not long after the return of many Rohingya refugees who fled from Burma to Bangladesh in 1978 after another upsurge of violence against them (Human Rights Watch). The government of Myanmar refuses to use the term Rohingya and insist upon calling them illegal Bengali immigrants from neighboring Bangladesh (Kipgen). As a result, most Rohingya are stateless since they have no paper proof that their community was established in Myanmar before the British colonization (Holliday). The situation of the Rohingya is similar to the concept bare life (Agamben) which reduces one’s life to biological life, namely, the fact that one is alive but without any political rights. Moreover, people who are reduced to bare life humans even lose the right to decide over one’s own life. Since Rohingya within Myanmar are stripped of every right – be it political, social or economic – the term bare life can be applied to their situation.

Since 2012 the persecution of Rohingya by Buddhists has become more violent. Leading to the – mostly internal- displacement of tens of thousands of Rohingya and the killing of thousands (Kipgen). Since 2016 the conflict became even more violent turning in one of the worst humanitarian crises the world has seen. Some Rohingya militants belonging to the radical group Arakan Rohingya Salvation Army (ARSA) sparked the conflict by attacking a military outpost from the army of Myanmar. The response of the army was disproportionate and hundreds of thousands of Rohingya were forced to flee to neighboring Bangladesh and thousands were killed in the most brutal way (Ramzy). The Rohingya militants defended the attack on the military outpost by claiming that they were only defending themselves against their oppressors (Wolf).

The disproportionate response by the Burmese army led to the UN and several other human rights organizations like HRW to condemn the government of Myanmar of being guilty of ethnic cleansing and even genocide (Barry). Fear arises that the brutal oppression and expulsion of the Rohingya by the Myanmar government can lead to radicalization among traumatized Rohingya refugees (Beech; Sude et al.; Wolf). Radicalisation is defined as the increase of extremist thoughts, feelings, and behavior by individuals or groups. This can lead to the implementation of terrorist acts (Mandel).

Effect of contested identity on radicalisation

Maalouf states in his book In the Name of Identity: violence and the need to belong that identities are often based on the identity of one’s enemy. Identity is not something that you are born with, you acquire it throughout life, it is a collection of allegiances. When one or more of these allegiances are under attack or being questioned, people will identify themselves even more with that allegiance. The allegiance under attack will become the most important part of their identity, even if before they did not consider that part of their identity very important. Other people who share the same allegiance that is under attack, will sympathize and join forces.

When people feel their identity is being threatened they can easily become aggressive and commit atrocities to defend their identity. If people feel that “others” – that is people who do not share the allegiance which is under attack – pose a threat to their own identity, they will consider anything legitimate to defend their identity. Even when people commit massacres, they are convinced they are only doing what is necessary to protect their identity and that of the group they belong to. You can clearly see this in how people in Myanmar defend the atrocities carried out against the Rohingya. They believe that Rohingya pose a threat to their identity and therefore they justify the violent mass slaughter of innocent men, women, and children (Al Jazeera; Wolf).

Radicalisation of Rohingya through contested identity

By denying Rohingya citizenship and by referring to them as Bengali the Myanmar government is contesting their identity because Rohingya consider themselves to be citizens of Myanmar, the country where most of them have been living for generations. Thus being denied citizenship by the country you consider your own and being persecuted, killed, raped and cleansed by that government can lead to radicalization. According to Maalouf the part of your identity that is being contested will be the part you will identify most with and it will only become more and more important. Rohingya are being discriminated against mainly because of their religion that is being seen as a major threat to the Buddhist identity of Myanmar (Al Jazeera). Thus because of the Myanmar government policies towards the Rohingya, their Muslim identity will become more and more important to them. Therefore it is plausible that more and more Rohingya will become more positive towards radical Islamist groups like Al Qaeda and Daesh because they are exploiting the situation of the Rohingya to gain power in Southeast Asia (Jayakumar). Because of the lack of attention and response from the rest of the world radical Islamist groups throughout Central and Southeast Asia and the Middle East may use the ethnic cleansing of Rohingya in Myanmar to recruit new members among Muslim youth and thus also among Rohingya who are because of their hopeless situation more receptive to radical propaganda (Sude et al.). Besides this risk, there is also the emergence of radical Islamist groups like ARSA who carry out attacks against the Myanmar military. Until now the radicalization of Rohingya is only happening on a small scale but an increase will not only have disastrous effects on the further development of the conflict within the borders of Myanmar, it risks to destabilize the entire Southeast Asian region.

Maalouf, Amin. In the Name of Identity: Violence and the Need to Belong. Arcade Publishing, 2001.

Mandel, David R. “Radicalization: What Does It Mean.” Home-grown terrorism: Understanding and addressing the root causes of radicalisation among groups with an immigrant heritage in Europe, 2010, pp. 101-113.